Who is at Risk 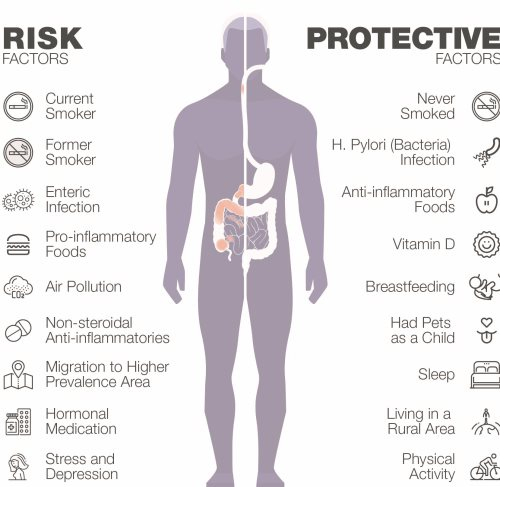 WHO IS AT RISK

IBD can be diagnosed at any age, but people are more frequently diagnosed before the age of 30. They can affect any race or ethnic group. Males and females are equally affected by IBD

The cause of IBD is very complex and is believed to involve a genetic tendency (predisposition) and a trigger in the environment that are combined to set off inflammation in the gut. Instead of being dampened down, the immune system then continues to run amok. The chronic (lifelong) process that results, can manifest as either Crohn’s disease or ulcerative colitis.

Different factors that may contribute to the development of IBD include the following:

The genetic impact on IBD has been long recognized. Early studies on twins show that identical twins are more likely to both have Crohn's disease or ulcerative colitis as compared to fraternal twins.

Genetic analyses of vast regions of the human genome have idenditifed more than 200 genetic mutations associated with the development of Crohn's disease and ulcerative colitis.

In many cases, these genetic mutations linked to IBD are also shared with other immune-mediated disorders including type 1 diabetes, celiac disease, rheumatoid arthritis, ankylosing spondylitis, and psoroasis.

Identifying the proteins made by these genetic markers paints a clear picture of the critical role between the immune response in the bowel and the 100 trillion microbes living there.

It is possible that changes in the gut microbiome trigger immune responses that cause abnormal inflammation. The gut microbiome is a community of microorganisms including bacteria, fungi, and viruses living in the environment of the intestines.

Since people with IBD are normally studied after the disease has manifested, it is still not clear as to whether the changes in the microbiome and immune response are a cause or effect of the disease.

It has been suggested that the use of antibiotics, which can alter the gut microbiome even long after antibiotics have been discontinued, may trigger IBD to develop.

Much more work is required to understand the exact causes of the microbiome changes and the changes that are most relevant to triggering disease so that treatments be developed to prevent or reverse IBD.

It has been suggested that children growing up in relatively sterile envrionments - without adequate exposure to microbes - do not prepare their immune system for handling microorganisms. They then develop an abnormal immune response that attacks their organs later in life when exposed to harmful microorganisms.

Research evidence that supports this hypothesis show that Crohn's disease and ulcerative colitis are less likely to occur in individuals who: live with pets in childhood; are raised on a farm or rural region; have a larger family; or drink unpasteurized milk.

Recent studies have also shown that susceptibility to IBD may be due to early-life exposures that change the composition of the intestinal microbiome, including loss of friendly microorganisms that could benefit the immune system. IBD is more likely to develop in those who were exposed to antibiotics within the first year of life and also in those who were not breastfed. Antibiotics and breastfeeding strongly influence the diversity of the microbiome in children.

Individuals with a history of infectious gastroenteritis are more likely to be diagnosed with Crohn's disease or ulcerative colitis, especially among childhood-onset of IBD.

Dietary factors may have a strong influence on the intestinal microbiome. Studies suggest that a western diet, one with higher consumption of fats and refined sugars, and reduced consumption of dietary fibre, changes our gut's microbiome.

Processed foods and pervasive fast food which have now gained popularity in our part of the world may also be contributors to developing IBD. The association between fast food consumption and IBD may be direct via exposure to fatty foods or food additives or indirect via lifestyle factors such as reduced levels of physical activities and stress.