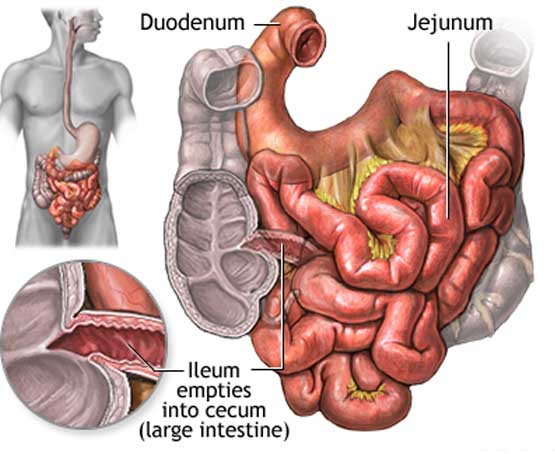 What is Crohn's disease?

Crohn's disease is a chronic inflammatory disorder that causes inflammation of the digestive tract. It can affect any area of the GI tract, from the mouth to the anus, but it most commonly affects the lower part of the small intestine, called the ileum. It is believed to be the result of an imbalance between proinflammatory and anti-inflammatory mediators. Genetic susceptibility, intestinal microorganisms, and environmental triggers are important factors which induce intestinal inflammation, although no single factor alone can precipitate inflammation. Historically the disease was thought to be more common in western population, but more recently the incidence and prevalence of Crohn's disease is increasing in developing countries of Asia and Africa.

The disease occurs in two age groups. First in the age group of 15 and 30 years (late adolescence and early adulthood), and the second occurs mainly in women between the ages of 60 and 70 years.

What are the symptoms of Crohn's disease?

Clinical manifestations of Crohn's disease are variable. Symptoms may be present for many years before the diagnosis is made.Fatigue, prolonged diarrhea with abdominal pain and with or without gross bleeding, weight loss, and fever, are the hallmarks. The inflammation in Crohn's disease involves the deeper lining of the organs involved and some people may also develop fistulizing Crohn's, in which the intestinal wall develops fistulas or tunnels that connect the intestine to adjacent areas, including the skin, bladder, vagina, intestine, and perianal areas.

Other symptoms of Crohn's include:

Sometimes other conditions can cause abdominal symptoms that appear to be similar to those of Crohn's. These conditions include:

How is Crohn's disease diagnosed?

An accurate professional diagnosis is the first step in treating Crohn's. Proper diagnosis is particularly important with a condition like Crohn's, because its symptoms may mimic those of other conditions and its effects are chronic, progressing over time.

To confirm the diagnosis — and to rule out other conditions that can cause similar symptoms, such as other inflammatory bowel diseases, colitis, celiac disease, or irritable bowel syndrome — a physician/gastroenterologist needs to do a thorough complete physical examination and perform some medical tests.

These diagnostic tests may include:

Different endoscopic exams may include:

• Sigmoidoscopy: This test is the most commonly performed endoscopic exam used to confirm a diagnosis of Crohn's. By using either a flexible or rigid instrument, a physician can evaluate the rectum and lower end of the colon for signs of inflammation.

• Colonoscopy: This test examines the full length of the colon, as well as the lower part of the small intestine.

• Upper endoscopy: In this exam, an endoscope is placed into a patient's mouth and guided through the stomach to the upper intestine.

• Computerized tomography (CT) scan: This extremely precise x-ray is used to detect abnormalities in the liver, kidneys, and intestines after a dye is ingested, administered intravenously, or inserted through the rectum.

• Magnetic resonance imaging (MRI): By using radio waves and superconducting magnets, this test can help detect fistulas and abscesses within a person's body without exposure to radiation.

• Ultrasound: By using sound waves, this test examines organs of the pelvis and abdomen without exposure to radiation.

• Upper GI and small bowel follow-through: In this test, x-rays help examine the esophagus, stomach, duodenum, and small intestine after a patient drinks a barium-based liquid.

Although there is no cure for Crohn's, the sooner Crohn's is diagnosed, the better the chances of managing its symptoms and avoiding potentially serious complications of the disease.

The complications that Crohn's patients experience depend on the location and severity of the disease. Some complications can be life threatening, while others are manageable with the help of treatment plans prescribed by a gastroenterologist

Crohn's may cause serious complications, which can happen over the course of the illness:

• A patient may experience painful cramps or vomiting due to food that is not able to bypass the obstruction.

• Patients who experience an obstructive episode are usually hospitalized and given intravenous fluids and salts to compensate for fluid losses.

• A fistula that tracks into the abdominal cavity may produce infection and form an abscess. Abscesses may also occur in the pelvic tissues or the perineum, if a fistula fails to drain.

• Abscesses can be difficult for gastroenterologists to diagnose; however, after they are located, they should be drained. This may require surgery.

• Patients are usually given a course of antibiotics to reduce the risk of further infection.

• The infection that results is called peritonitis and requires emergency surgery in which the leak is sealed and the abdominal cavity is cleansed to stop infection.

People with Crohn's may experience chronic or long-lasting complications that require ongoing management:

• Anemia in Crohn's may be the result of chronic blood loss; bone marrow depression; or failure to absorb iron and folic acid, which are important in stimulating the production of red blood cells.

• Certain medications, such as sulfasalazine, may also exacerbate anemia. To combat most cases of anemia, gastroenterologists often prescribe supplements, and recommend a diet rich in iron.

• Loss of protein, tissue breakdown due to steroid use, poor diet and, in some cases, failure to absorb nutrients result in weight loss and nutritional deficiencies.

• Gastroenterologists often prescribe nutritional supplements to avoid the complications that result from deficiencies in vitamins A, D, E, and K.

The general goals of treatment for Crohn disease are as follows:

• To achieve the best possible clinical, laboratory, and histologic control of the inflammatory disease with the least adverse effects from medication.

• To permit the patient to function as normally as possible.

• In children, to promote growth with adequate nutrition.

There are two general approaches to the outpatient treatment of Crohn disease: step-up therapy and top-down therapy. Step-up therapy typically starts with medications that are less potent and (often) associated with fewer side effects. If those therapies are ineffective, more potent (and potentially more toxic) medications are used. Top-down therapy starts with more potent therapies, such as biologic therapy or immunomodulator therapy, relatively early in the course of the disease. In general, we favor step-up therapy. Currently available treatments for Crohn's include:

Some people may experience long periods of remission when they are free of symptoms. However, symptoms usually recur at various times over a person's lifetime. It is not possible to predict when a remission may occur or when symptoms will return. Because of the unpredictability of Crohn's, one may need medical care for long periods of time.